The beginning of the twentieth century saw the birth of Bouillon Racine as we currently know it. It was in the atmosphere of Art Nouveau where Parisian workers and then the upper-class city folk first met.

The first Bouillons appeared in 1855 thanks to a clever butcher, Pierre Louis Duval. He proposed a single dish of meat and a bouillon (soup/stock) to the workers of the Halles. In 1900, nearly 250 Bouillons could be found in Paris. They became the first chain of restaurants for the working class. 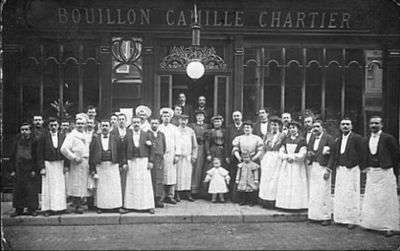 Meanwhile, the charm of Art Nouveau spread through Europe, in architecture, furniture and decoration. The Universal Exhibition in Paris accelerated its influence. Restaurants followed the trend. In 1904, a new bouillon with a luxurious Art Nouveau decoration was born. It was a Bouillon Chartier. The architect was Jean- Marie Bouvier. It was with Louis Trezel that he gave birth in 1906 to 2 other Bouillons Chartier named after the 2 Chartier brothers : the Grand Bouillon Camille Chartier on Racine Street and the Bouillon Edouard Chartier on Bd du Montparnasse. These restaurants showed the so characteristic Art Nouveau style: carved wood and ceramics, with mirrors and glass paintings. Today, only a few authentic Bouillons remain, such as this one in Racine Street which has the most baroque style of Art Nouveau. Camille Chartier kept the restaurant until 1926. After several owners, the University of Paris opened there a restaurant for the staff of the Sorbonne in 1962. It remained operational until 1993. The major part of the decoration survived but the restaurant did not benefit from the special care dedicated to historical restaurants. The complete renovation of the Bouillon Racine took place in 1996 thanks to the “Companions of the Duty”. It then called upon old expertise of almost lost techniques and skills. Bevelled mirrors, painted opalines, stained glass, carved woodworks, marble mosaics and gold-leaf lettering provide the public with the pleasure of a rich place, as much by its beauty as by its conviviality. It was subsequently classified as an Historic Building. With his olden splendour back, the Bouillon Racine offers Parisian life an immersion in the Paris of the 1900’s.

INSTITUTION IN FULL HEART FROM THE LATIN QUARTER

Ideally located in the heart of Paris and the Latin Quarter, close to Saint Michel and Odéon, the Bouillon Racine offers an immersion in the unique atmosphere of the Paris of the 1900s. The restaurant offers two floors and is open everyday from noon to 11 pm (last order). 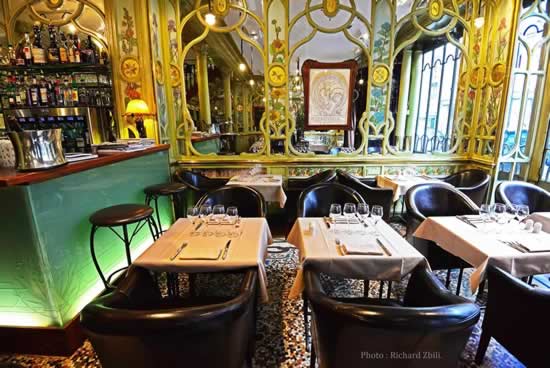 THE BOUILLON RACINE’S HISTORY IN VIDEO

By Luc Morand, owner of the Bouillon Racine 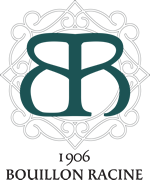